rating based on 222 customer reviews.

" Arrived earlier than I was told it would! All parts fit together perfectly. Could not be happier with this plow! Does everything it is advertised to do. Great product "

" Ordered 8 Ft Snowsport HD plow. I was very pleased when the plow came 2 days earlier than promised. I have about 10,000 Sq Ft of driveway and a large parking area to plow, all gravel. It did dig up the gravel on the few days that the ground was not totally frozen, but that is to be expected. For the money invested, I couldn't ask for more. I did notice that the cutting edge is getting a little chewed up already but I assume I will get many years use out of it before that will need to be replaced. I can't tell you how happy I am to be plowing while sitting in my heated truck, not outside in the elements replacing sheer pins on my snowblower. "

" Plow works as advertised...seems to function best with more snow vs less....does not scrape the snow to the driveway tar but neither did the hydraulic plow my neighbor uses. Snow tilts out of box when in reverse. Good value! "

" I got my plow last week. I put it on Friday and it snowed it worked great. The snowplow is very well made and was surprised how well it works no more in the cold. Great made snow plow. "

" I haven't had an opportunity to try the plow due to a lack of snow. However, the assembly of the items was very straight forward and from what I can see will work very well. "

" I have only used this two times so far but it has worked very well. I have an 860 ft. steep driveway. I am 64 (woman) and it is very easy to connect and disconnect. I had the tow hook put on at a local brake/tire shop. Assembling the plow was a bit of a challenge but I did it by myself. Some of the guys I mentioned it to couldn't see how it would work well but, I see no drawbacks and there is really nothing to easily break. It is simple to manually change the angle. "

" I originally purchased this plow because I did not want to be out in 10 degree temps replacing a hose, a solenoid or any repair. And I could not justify spending 3-4 grand to plow my own driveway. This plow has performed well. Takes everything Mother nature threw at it. Living in western NY, she has seen 3' of lake effect snow more than once. It also plowed 3 additional driveways in city. Unable to back drag with this plow is a draw back on those short city driveways, but can be done. After 9 years the plow held up well, no dents, bends, even rubber edge did not need maintenance. The frame was due for paint but the blade, being aluminum looked brand new. The plow does seem to require more passes than a plow with a lift, the maintenance free design out weighs that. Very happy with this plow, simple and dependable. Have recently lost the plow due to a barn fire and its time to replace it. There are many additional personal plows on the market now. The same argument for buying this plow still stands. If your balls are bigger than your wallet you wont like this plow. But if you do not mind the neighbors seeing you get out to lowering it by hand you will love it. "

" Enjoyed the warm weather build and now prepared for snow! " 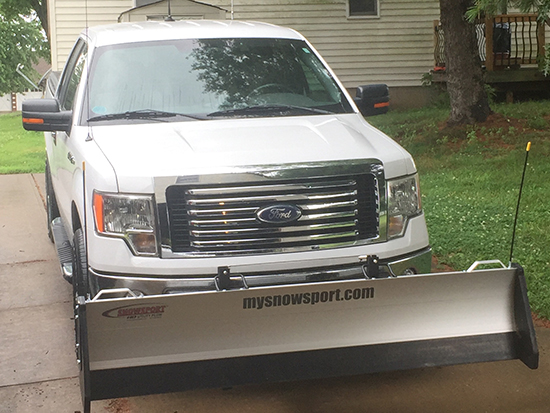 " I couldn't be happier from the order to the install and performance of my plow. Very fast shipment,easy install and works great wish I would have done it sooner. Only suggestion would be is to make the plow markers taller other than that, great service, great product and great performance. "

" This year we're getting real snow! After the first snow, I called our favorite snow plow guy and left a message on his phone. I know he was busy, but after a week without hearing back from him, I stumbled online on the Snowsport HD plow, and after 2-3 days of hesitation, I ordered it. When it arrived, it assembled easily with the instructions. My only disappointment is that the receiver was shipped from a separate facility and arrived a few days later. So I mounted it on the back of my Dodge Grand Caravan which already had a 2" receiver. Even going backwards, I was amazed at what I could do with 2-wheel drive. Then the receiver arrived, and installed very easily on the old Suburban. And then we got a real snow - about 12-15 inches. The plow worked incredibly well, and after three more snows, I don't know what we'd have done without it. I can completely clear our 100 x 150 foot parking lot in less than 30 minutes. One caveat: don't expect to plow 2 feet of snow all at once. Above a foot or so, the snow will start coming over the top of the plow. With more than about ten inches, you'll be needing to push that snow to the side off the road frequently. And as soon as you make a pass, try taking perhaps half a plow's width instead of the whole width at once. The plow is light compared to a standard hydraulic model, which means it's easy on the front end of your vehicle. The plow lifts off, which means that you can easily remove it when you don't want to drive around with a big, wide plow on your machine in town. All in all, very satisfied. If I'd known how good this works, I'd have bought one years ago. Especially for the price! " 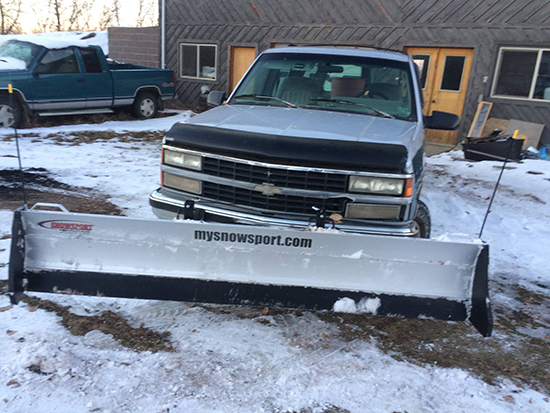